“I felt like Teaching was my calling, I found it really fulfilling and found it quite natural speaking in front of people.  I was originally unsure as to whether I wanted to teach Primary or Secondary but after working as a PSA for a year in a Primary school I decided I preferred working with children at an age where they were a bit more responsible and so I went on to study at Sheffield Hallam University to be a Teacher of Secondary, specifically PE. 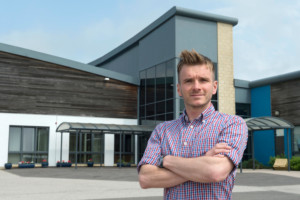 I moved to Aberdeenshire in 2011, as I qualified in England I had to register with the General Teaching Council for Scotland (GTCS) but this was really straight forward, I had to prove my qualification, provide a reference from my previous school and I was able to get straight back into the class room.  It wasn’t hard to make the transition from Teaching in England, I just followed the Curriculum for Excellence as I would the National Curriculum and actually I feel like a I have a bit more freedom to be creative in my Teaching style here.

I relocated from Sheffield to Turriff, it’s not as far out of the way as you may think, you actually have access to more than you do in the city and most of it’s free, we have the beach and open space for walks.  I really like the community spirit you find in the little towns, in a city you are a stranger, but people know each other here and look out for one another.”

Find out more about Teaching in Aberdeenshire